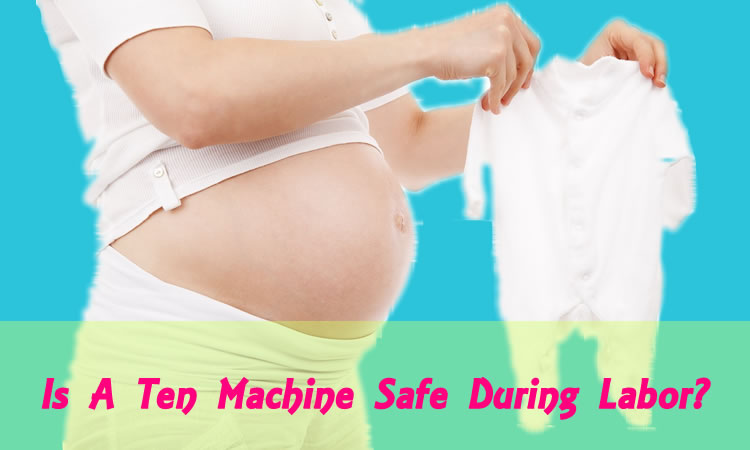 If you’re wondering about how to use a TENS unit or want to know how does a TENS unit work, please refer to our other articles. Likewise, if you’re interested in knowing about the possibilities of using a TENS machine during pregnancy, we have an in-depth article on that as well.

TENS machines are really only effective during the early stages of the birthing process when contractions are painful.

During labor, some women place four TENS pads on their lower backs. The control for the TENS unit has just two knobs, one to control the speed of the pulses and one to control their strength. Due to the easy controls and small remote, the woman will be able to adjust the settings as needed to adapt them to her pain.

TENS units and their users have expressed some success to redirect the pain of labor. TENS units also help the brain in releasing Endorphins, which are a natural pain killer.

Even though there is little study or evidence regarding the effectiveness, about one in five (20% of) women use a TENS machine during labor, and many go on to use it again when they have their next child. A TENS machine is likely to be used most during early labor, and later on during the birthing process it’s likely a TENS machine on its own will not be enough. Most women require multiple pain relievers in a few different forms during pregnancy.

When you first go into labor, the most painful part will be the contractions. By placing the pads on your lower back, you will be able to help stop the pain signals while assisting your brain in releasing endorphins. Many TENS machines have a "boost" button that raises the speed and frequency of the pulses to deal with severe pain. If you choose to use a TENS machine during labor, you can use the boost button when a contraction starts to help with the pain even more. Remember to turn the boost setting off once the contraction ends, though, so that you can actually feel it’s effects when you need to use it again.

When the birthing process actually begins later in the stages of labor, you will likely have the TENS machine removed as you are taken to a different area of the hospital. While it helps a lot during contractions and the initial pain you may experience, stronger pain relievers are typically necessary during the actual birth of your baby.

You can either purchase or rent a TENS machine. Most hospitals do not have them available as they only really have an effect during the early stages of labor to help with contractions. Once the birthing process actually starts you are typically moved to a different section of the hospital where other more effective pain relievers can be given.

You can buy TENS machines for labor, but it’s best if you rent one as you will likely not use it again after your baby is delivered. We have another article that goes in-depth about the different units available, so refer to it for more information on brands.

There are two rather well-known brands of TENS machines built for labor and the birthing process. Mama TENS and Elle TENS can both found on Amazon and have really great reviews.

Cons of Using a TENS Machine

While there are many benefits to be reaped from using a TENS machine during pregnancy and labor, there are some downsides you need to review prior to making your decision:

Consult with your doctor and midwife ahead of time and discuss with them the possibility of using a TENS machine during labor. Ask them about the chances of it helping, how long you’ll be using it for, and how many women have had success with it. These will be the deciding factors that will assist you when choosing whether or not to use a TENS machine during your pregnancy or labor.