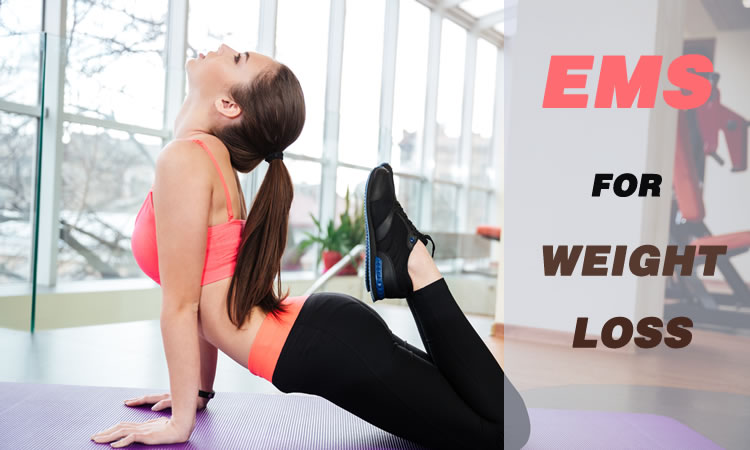 Recent studies are now describing what some of us have thought for a long time: EMS is a proven way to lose weight.

Electrical muscle stimulation therapy (EMS) has played a role in people’s fitness and wellbeing for some time.

Research has shown how effectively these units could tighten and tone a range of muscle groups.

These popular and portable devices involve adhering electrodes onto the skin, but their appearance has improved considerably since their early conception.

Their reputation has also improved, with health experts stressing their importance as a training tool for healthy individuals and athletes alike. EMS technology, also known as neuromuscular electrical stimulation (NMES) or electromyostimulation can be used during exercise to boost strength and intensity, or it can be administered while you relax, rehabilitate or rejuvenate your body.

Perhaps you have injured yourself or overdone it at the gym? You can use EMS machines to keep your muscles active during restful and sedentary periods and, as we will demonstrate below, they apparently work for burning fat, too!

Is EMS technology the same as TENS machines?

No, EMS units are frequently confused with TENS devices, and it’s not hard to see why.

Both of these systems use electrical currents to ease muscular pain, and both have been shown to increase blood flow and circulation.

TENS units are probably best known in the population for reducing pain during labor: their penetration power is low, and the electrical stimulation focuses on a single muscle at a time. They work by blocking the nerve signals and by increasing the body’s natural pain relievers, giving instantaneous pain relief.

TENS units are not directly recommended for weight loss, unlike their waist-reducing counterparts. EMS technology works across a number of muscles at the same time.

This powerful penetration contracts and relaxes the muscles, increasing their movement and is mostly commonly associated with being an alternative solution to physical exercise.

When it comes to honing muscle, the effects are permanent. EMS can also improve soreness and tightness around the body by targeting the actual cause of the pain.

So, EMS is not the same as TENS – they have different uses - but you can buy TENS and EMS combo units and experience both forms of help at the same time.

So how does EMS work for weight loss?

This fascinating study looked into the electrical muscle stimulation therapy has on tackling obesity; a condition linked to increased health problems and decreased life expectancy.

A control group was taken, and they received no EMS while the experiment group was subjected to high-frequency currency therapy three times per week, over a six week period.

Both groups had their dietary intake and fitness monitored to ensure that they did not do anything out of the ordinary.

They had their body measurements assessed at the beginning of the process and the end; with the findings stating that the use of high-frequency current technology as a way of diminishing abdominal obesity could be supported.

Waist circumference, abdominal obesity rate, subcutaneous fat mass, and body fat percentage were all found to have improved in the experiment group.

The report concluded that: “The use of the high-frequency current therapy may be beneficial for reducing the levels of abdominal obesity in young women.”

Furthermore, a separate study of World Congress researchers concluded that: "Strength training by NMES does promote neural and muscular adaptations that are complementary to the well-known effects of voluntary resistance training."

This is positive news – but what is not quite so clear is how or why this happens. We know that muscles kitted out with electrodes contract in a similar way to those put through the strain of general gym exercise.

This is because the artificial electrical impulses mimic those made by the brain to the nerves during typical training.

When the EMS technology is administered, the fibres within the muscles tear from natural stress and repetition. Once damaged, these fibres gradually repair themselves to be stronger than previously.

Stronger fibres can resist further harm, or so your body is inclined to think. This explains the toning that can be achieved from these devices, but it doesn’t explain the fat reduction.

What is surmised here is that calories are burned through any form of exercise, including the electric contracting of muscles. If used frequently and effectively, and as part of a healthy lifestyle, you too can see a reduction in your abdominal fat.

Does EMS work for weight loss - you may have asked - never really thinking the answer existed. Now, through this research, it seems that we have some proof that it does.

Notes about following the guidance and instructions

EMS training for weight loss is a completely safe method of toning your abdominals, and other problematic areas, and for reducing fat through the burning of calories.

Of course, this complimentary technique won’t show results overnight, and any improvements will not be dramatic. The best way to use EMS units is alongside other diet and fitness plans.

The electrical impulses that are used to contract and relax the muscles can be felt by the user – it feels like a small electrical shock to the associated muscle groups.

Like any extensive exercise, some people enjoy this sensation - and feel reassured that the device is in operation - while others find it uncomfortable.

The placement of the electrodes can be critical to the correct stimulation of the area. When placed correctly, the sensation should be moderate but not intense. Take care to read the instruction manuals carefully for full details, especially before first-time use.