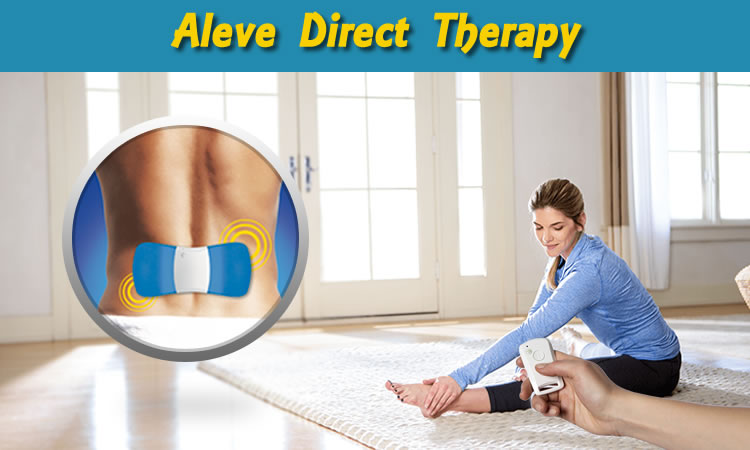 From the company Bayer comes Aleve Direct Therapy, a completely new TENS device. This particular product is made specifically to be used for lower back pain. Lower back pain can come from a range of different sources, from poor posture to work or health conditions.

Aleve Direct Therapy provides you with adjustable pain relief via a wireless remote. Now we will get into more specific details about this new product so that you can determine whether or not it is an appropriate device for you. This unit has been cleared by the FDA and is a Class II medical device. 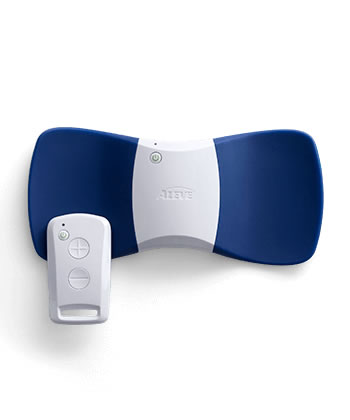 For a quick look at Aleve Direct Therapy, I suggest checking out this tv commercial. The actress shown is Christina Elisa.

Aleve Direct Therapy is a fairly basic TENS unit and does not appear, from what I have seen, to have any selection of programs or modes. For some people, this is likely not going to be a very big issue. If on the other hand, you have previous experience with TENS units and you know you want a device with programs, this may not be the unit for you.

On one side not having a selection of programs or modes does make matters somewhat simpler and easier—there are fewer options and choices, making it less confusing. On the other side, however, it also leaves less room for personal preference and customizability.

Each session with these three stages lasts a period of 30 minutes before shutting off. 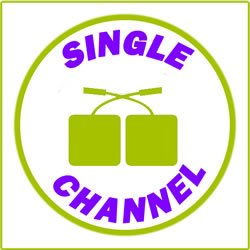 Like I just said, this is a very basic TENS unit. It does not have programs and modes, and it doesn't have dual channels, either. The Aleve Direct Therapy operates on one single channel.

I have seen a lot of people express the importance of having a dual channel unit because it means that you can have different modes and different intensity levels on different areas of the body. A dual channel may often come in handy.

The good part about this, however, is once again—it is less complicated. Because the unit can only really be placed on one place at one time, and it only has adjustable intensity levels, it might be most practical to have only one channel. If you had two channels, I am not even certain that there would be any way to use them both due to its design.

Despite other limitations, the Aleve Direct Therapy tens kit does have 15 intensity levels to choose from. This is important because it dictates the degree of power that you can implement in your session.

15 is actually a pretty good number to choose from; it should give you plenty of variability for finding just the right level that works best for you. The fewer intensity levels on a TENS device, the more likely that you will be stuck choosing a level that is either too powerful or too weak. 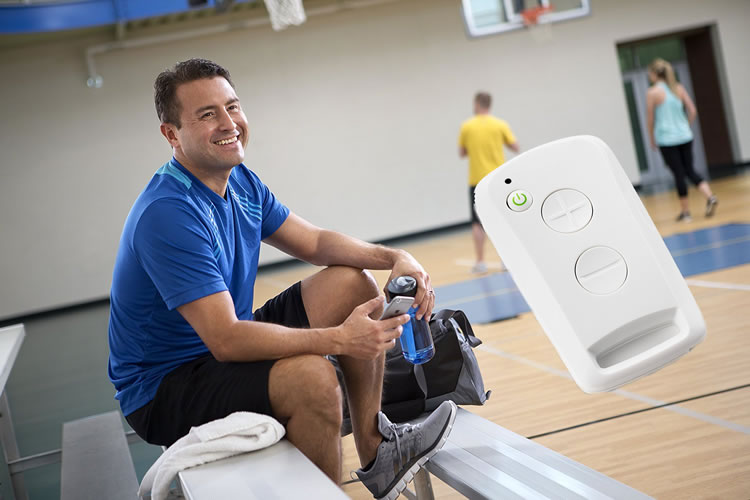 When it comes to simplicity, the Aleve Direct Therapy is quite easy to use. It does lack any kind of screen so that you can see your options, but otherwise, it is very straightforward. Clearly, it would be challenging to set the device while it is on your back, so it comes with a handy little remote.

I have seen a few people complain that the instructions were poorly written, but most people seemed to figure out how the unit worked fairly easily. 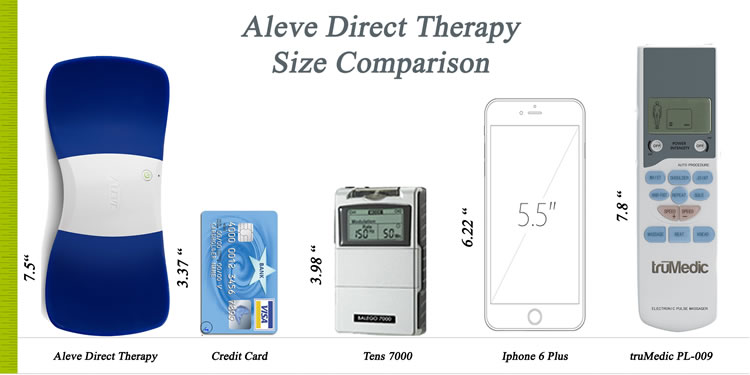 The exact dimension of the TENS unit is 0.7” x 7.5” x 3.5.” Just from looking at it you can see how it was made to fit right over the lower back to provide pain relief. It weighs 4.8 ounces which is fairly lightweight.

The remote control is very small and can easily fit into almost any pocket. It is also wireless. Because of this, you can pretty much take the device with you anywhere, it provides a great degree of accessibility.

Unfortunately, I have seen a couple of complaints that the pads can't support the weight of the device if you are upright, and it will fall off. This could pose a problem if you wanted to use it on the go.

The unit is powered by two AAA batteries. Many people prefer rechargeable lithium batteries as opposed to disposable ones, but it isn't too uncommon to see a TENS unit that uses AAA batteries.

You still have the option of purchasing an AAA battery charger and the rechargeable AAA batteries, of course. One way or another you will likely end up spending slightly more than you would if the unit had a rechargeable lithium battery. 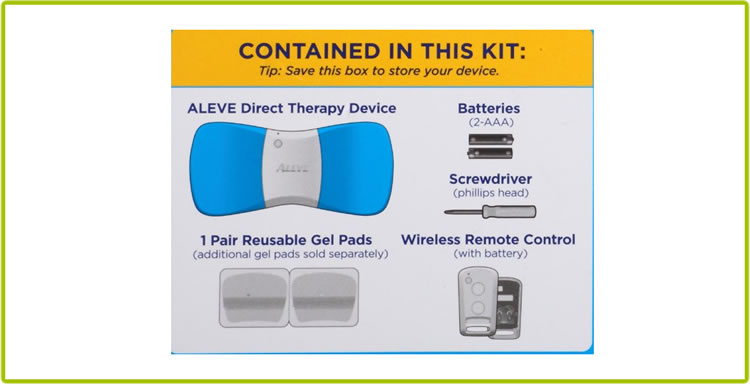 The Aleve Direct Therapy tens device comes with a one year warranty. This isn't too bad, many TENS units I have seen have warranties which are much shorter. There are warranties that last longer out there, but generally, this is a pretty good deal.

Aside from the price of the unit itself, you will have to pay for refill gel pads. These may be found online at Walgreens, CVS Pharmacy, or Amazon.

Unfortunately, the price can run a little high, and this is a big turn off for many people. They are about $15-$20. Don't forget that you will also have to think about replacing the AAA batteries, and remote batteries, which are two other expenses.

If you are not sure which wireless TENS unit is right for you, we recommend to check out this article that compares 7 wireless TENS machines.

On both Amazon and the official website for Aleve Direct Therapy, customer ratings are fairly positive. According to users, the device does work, which is one of the most important things. Most people like the fact that it is wireless and fairly small. A lot of people enthusiastically say they got “instant, lasting relief.”

There are a few negative reviews about the pads themselves. Quite a few people don't like how expensive they are, and some others have had issues getting them to stick correctly. They are very sticky which can be a little frustrating, but sometimes they don't stick well to the device itself.

Interestingly, the Aleve Direct Therapy actually looks a lot like another TENS device called WiTouch Wireless TENS. They have quite a few things in common like they both have the same weight, dimensions, replaceable gel pads, remote, wave form, and pulse width (120-240). They both use an asymmetric biphasic square pulse, and they are also both single channel units.

There are some differences when it comes down to price. Also, WiTouch Wireless TENS has lasted for years and garnered some great reviews — Aleve Direct Therapy is new.

WiTouch Wireless TENS is slightly more expensive at about $60. At first, you may think it is the worse deal, but it comes with 10 gel pads rather than 2 gel pads you get with Aleve Direct Therapy.

What's more, when you buy 2 pairs of Aleve Direct Therapy gel pads the price is about $15, as mentioned before. If you get the gel pads for WiTouch, however, you can get 10 pads for $20, which is immensely better. You are looking at the difference between paying $2 or $7.5 per pad.

This is why we ultimately recommend WiTouch Wireless TENS as it is more economical.

According to reviews, it does. It is based on the principles of TENS, and many people have found relief through using TENS units.

Is it okay if I use Aleve Direct Therapy with a pacemaker?

This is not usually recommended because the electric signals from a TENS unit may interfere with or interrupt implantable cardiovascular defibrillators and pacemakers.

Is it only for the lower back? Can I use Aleve Direct Therapy on other areas of my body?

This device was designed specifically for the lower back, but many people have claimed that they successfully used it on other body areas, such as upper back, shoulders, and thigh. There are some places it may not wrap around, such as the neck. It doesn't hurt to experiment and see where it will work for you. You may also be interested in checking out the question “what are my other options?”

Can I control the time of the unit from the remote control?

No: Every session is programmed to last 30 minutes. You can, however, use the remote to start or stop a session.

Is there a coupon code for Aleve Direct Therapy TENS Device?

At the time of this writing, we weren't able to find any active coupons for this device. I suggest you defer to the price table above if you are trying to find the best price. If you go to the right place, you could save as much as $20.

Does the drug Aleve (naproxen) have anything to do with Aleve Direct Therapy?

Basically, no. While Aleve is a drug you take, often in pill-form, to help with fever, swelling, or pain, Aleve Direct Therapy is a machine. There is no relation between the two.

Is Aleve Direct Therapy safe to use?

Although it is safe, there are certain safety precautions you can take which apply to all TENS units. If you are pregnant, epileptic, have a bleeding disorder, or use a pacemaker, you shouldn't use TENS devices. Some sources have warnings about using TENS units on the head or if the unit is on Constant and you are asleep. There are some very minor side effects, which are skin irritation and muscle soreness or twitching.

Where to Buy Aleve Direct Therapy in Canada

Although not available on Amazon.ca, you can still get this unit in major stores locally. Check out CVS Pharmacy, Riteaid, Walgreens, Walmart, and Target (shop).

How much does Aleve Direct Therapy cost?

This unit costs anywhere between $40 and $60 depending on where you go to buy it. Aside from the initial purchase, you will also have to pay for remote batteries, AAA batteries, and replacement pads.

The AAA batteries generally last 120-130 minutes but may last as long as 4-6 hours. The batteries in the remote may last for six months—this all just depends on how often you use the device. Lastly, you will have to pay for gel pads, 2 of which cost about $15 and they may last up to 5 times.

I suggest checking out our article about how to extend the lifespan and stickiness of pads because this can really make a difference.

What are my other options?

Aleve Direct Therapy is made to be used for back pain, even though you can possibly use it for other parts of your body. If you are suffering from pain in other areas, I suggest looking at different TENS units. There are some great options out there, like Healthmateforever PRO12AB. This is a good choice because you can get accessories like gloves and belts specifically for different areas of the body.

Aleve Active Therapy appears to be a pretty good TENS unit. It does lack in options when it comes to modes, but it has a lot of intensity levels to pick from, and it has been helpful for many people with lower back pain. When compared to the WiTouch Wireless Tens, however, the WiTouch has the advantage simply because the pads are much cheaper.
TensUnitHub Team
★★★★★
★★★★★
6.7
More Details
***

How to Choose the Best Tens Unit

HealthmateForever Review: Everything You Need to Know

HealthmateForever YK15 Review: Is This Unit for You?

InTENSity Twin Stim III Review: Everything You Need to Know

InTENsity 10 TENS Unit Review: Covering all the Facts About This Unit

Pharmedoc Tens Unit - Is it Another PL-009 Clone?

TENS 6000 Review - Details Regarding This Device